I didn’t mean to have a whole section on religion again, but it’s because someone had questions about me not being more expressive about friends who turn to atheism. Continuing with this understanding of the difference between God as God really is and God as I understand God, I’m reminding of this question of emergent thought. People always ask me “isn’t the emergent church a bunch of balderdash?” Normally, I would say it’s not a church; it doesn’t have a hierarchy or a denominational structure. It has no denominational manual to guide its actions. It doesn’t even have a set of written beliefs that instruct people on what to believe. No, it’s just a movement, I would say, of different voices. And if you criticize you must specifically criticize a specific person because they have different voices.

Well, I read the best analogy or actuality of what is emergent. It’s not a church or a denomination, but it’s also not a movement. It’s more properly called a conversation. I’m thankful for that reminder. It’s a conversation among disparate and disagreeing voices, but most importantly it’s a group of people who have felt comfortable enough to create a space in which people can struggle and wrestle with questions that don’t seem to be satisfyingly (intellectual, emotional, spiritual satisfaction) addressed by mainstream Christianity. But the voices themselves don’t agree. They offer up various interpretations and understandings. So when criticizing the group it’s important to criticize specific people since they don’t all believe the same points. But they are so willing to enter into conversation together, that you can find one person write a review on the first inside pages of a book of a person with whom he disagrees on some points.

I love this! In one way, it implicitly suggests there is something higher than belief or faith (and there is). They have found it and I want to experience and share in it; it’s called love. Secondly, it creates a place where, as I said before, it’s less about naming God and more about entering the space where God names you (experiential truth rather than descriptive truth). 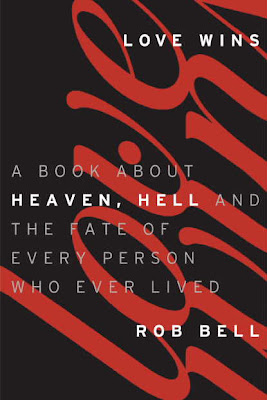 Now most of these guys are obscure, some are academics (and academics always disagree and say crazy things. . . .well, sometimes). But I’m always quite curious when someone who is in the spotlight has the courage to ask a question and offer a different understanding contrary to mainstream belief. And that’s what happened with Love Wins. I normally don’t like to speak about controversial matters, especially when they don’t matter. But I know what it’s like to step out and put your neck out there for a cause, for family, for a friend, for a beloved one, for an enemy. And I know what it’s like to experience the onslaught of criticism and the silence of friends. So since I’m a friend of Bell, the author of Love Wins, I thought I would say how courageous he is and how I admire that.

Usually people consider Brian McLaren the “elder statesman” of the emerging conversation. But to be honest, there are many that have questions and thoughts though many would never say anything because they belong to orthodox churches or groups or lead them and it wouldn’t work. Some might lose their job or position. In the middle of all this is a pastor who has been steadily rising in visibility and influence (he has a widely popular video serious called Nooma used by all types of Christians). He normally writes suggesting stuff in the forms of hints or whispers. He doesn’t always write everything he thinks or push you all the way out of your comfort zone. So I used to read his books and wonder “I wonder if he’s holding back or thinks other things that are different than the mainstream.” I could give examples, but he has now written a book that questions the doctrine of hell. Remember people don’t like doctrine to be questioned. This is because doctrine is tied into belief. And for many people belief is central because it is identity forming. Belief determines who you are. Belief also determines where you go when you die. Not relationship, but belief. So it’s unsettling for a lot of people. And I wanted to say amidst the vast onslaught of negative criticism and silence of friends, that I admire Bell for asking the question and going there. I also admire Bell because he asks such questions not out of a sympathy for people who are not Christians or out of a desire to have a more convenient message. No, he asks because he’s actually seeking the truth. He studies hard and long and reads everything he can. He’s seminary-trained and he dives into the culture and context of the times. He’s coming with a fully armed knowledge base. No, it’s not soft, fluffy convenience. He’s rather trying to conform to the image of God he’s experienced in Jesus.

So let me end this section with the prompt for the book. Bell’s church recently had an art exhibition with artwork displayed around the church. One picture was a picture of Gandhi. Someone—no one knows who—decided to take a note and stick it under the painting of Gandhi. It read “News Flash: He’s in Hell!” Bell then asks “Really? Gandhi’s in Hell? And you know this for sure? And someone felt the need to share it with the rest of us?” Bell goes on to ask from where does the idea of hell come. How does it all work in the end? Is the central message of Jesus that God is going to send you to hell unless you are one of the select few who are saved from hell by Jesus? If that’s true, how are the select few chosen? Who decides who is in each group? And what happens to the rest of us?

It’s quite provocative and not new. The tough part of mainstream Christianity today is that there are plethora of diverse voices in the history of it, but many times we miss different understandings and interpretations because only one perspective maintains the dominant space in popular literature, movies, and sermons. That’s why it was so strange to see someone popular say something like that. But hey, as Bell would say don’t just accept what he says. Test it, prove it, wrestle with it, and probe it. “God has spoken. The rest is just commentary right?”